President Peter Mutharika made a National Address on the Status of Food Situation in the Country. Nyasa Times reproduce full text the President’s address:

I have called for this press conference to share with you the current food security situation in the country. 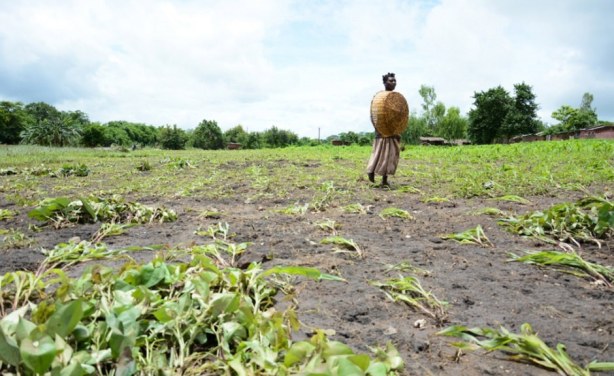 Photo: UNDP/Arjan van de Merwe
Floods in early 2015 were the worst in living memory in Malawi, washing away homes and food stocks, and ruining fertile land.

The floods affected about 1.1 million people. It damaged people’s property and public infrastructure and at least 64 000 hectares of crop fields throughout the country, mostly in the Southern Region. One hundred and one [101] people were killed and 172 people were reported missing.

The magnitude of the floods caused my government to swiftly move in and, as you will recall, I declared a state of national disaster in the 15 most affected districts and I appealed for assistance on 13th January, 2015. The response to my appeal for assistance was commendable. Let me take advantage of this opportunity to thank all the development partners and the entire humanitarian community for the assistance to the flood-affected households that they rendered, and continue to do so.

Soon after the floods in January, 2015, the season was characterized by intermittent rainfall and prolonged dry spells in most parts of the country. The combination of the delayed onset of rains, the worst floods, the intermittent rainfall and the prolonged dry spells at critical stages of maize development, led to a food deficit of 223 723 metric, for the first time since the introduction of the Farm Input Subsidy Program.

The Government of Malawi, through the Malawi Vulnerability Assessment Committee (MVAC), carried out a food security assessment exercise from 8th June to 2nd July 2015. The exercise was aimed at assessing the food security situation in the country, and determining the number of people who are likely to be food insecure during the 2015/2016 consumption year.

The results of the assessment show that a total of 2,833,212 people will not be able to meet their annual food requirement during the 2015/16 consumption period. This represents 17 per cent of the country’s total population. The affected population is spread in 25 districts, namely: Chitipa Karonga and Mzimba in the Northern Region; Dedza, Dowa, Kasungu, Lilongwe, Mchinji Nkhotakota, Ntcheu and Salima in the Central Region; and Balaka, Blantyre, Chikwawa, Chiradzulu, Machinga, Mangochi, Mulanje, Mwanza, Neno, Nsanje, Phalombe, Thyolo and Zomba in the Southern Region.

Although there has been people facing hunger in recent years, the situation this year is the worst in many years. The MVAC report estimates the total humanitarian food that is required to support the affected people to be at 124,183 metric tons of maize equivalence.

Following the MVAC food insecurity report, the government has developed the 2015/2016 Food Insecurity Response Plan. The response plan requires a total of US$146.378 million.

I would like to assure you that the Malawi Government is ready to support the 2.8 million people facing hunger. In the meantime, the government, using its own resources, has bought 30 000 metric tons of maize from Zambia at the cost of K2.82 billion, and it is in the process of buying additional 26 000 metric tons, at the value of about K3.5 billion. This maize will be used to stabilize the price of the commodity on the market through Admarc across the country. The Strategic Grain Reserve currently has maize in stock and it continues to be replenished. The government is therefore, ready to roll out food relief to food insecure households during the lean period from October, 2015, to March 2016, as recommended by MVAC.

As has always been the case, another MVAC assessment is due in October, 2015. Based on the historical trend, that assessment is likely to show a larger number of people facing hunger than is the case now. In view of this, I would like to appeal to all our development partners, other countries, non-governmental organizations, civil society, the private sector and individuals, both in Malawi and elsewhere, to complement government resources in assisting the food insecure households. Donations can be in cash or in kind.

The 2015/2016 Food Insecurity Response Plan as well as details of the government’s bank account for cash donations can be obtained from the Department of Disaster Management Affairs in the Office of the Vice President.

I would also like to call upon all stakeholders, including implementing partners who will be involved in the implementation of the response plan, to be accountable in assisting the needy. We need to move together in alleviating the suffering of the food insecure Malawians who are looking forward to government’s support during this difficult time.

Let me take advantage of this opportunity to express my appreciation to development partners and other donors who have so far provided food assistance in response to this year’s food needs.

With these remarks, I thank you very much for your attention.