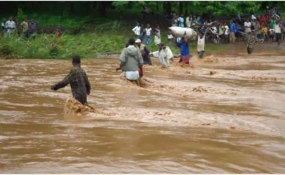 At least 176 people have died in flash floods ravaging Malawi and 200,000 others displaced, Vice President Saulos Chilima said on Friday.

Speaking after visiting worst affected Lower Shire districts of Nsanje and Chikwawa, the vice president said the death toll is feared to rise further as more than 150 people are missing.

“So far, the death toll is at 176 and at least 153 are reported missing. We fear the death toll will rise number because several other people are missing and some parts are in accessible to establish the extent of the damage. Over 200,000 have been displaced after their houses were destroyed by the floods. Malawi is facing a big challenge” Chilima told a news conference.

Devastating floods continue to wreak havoc in most parts of Malawi with some areas being hit with a month’s worth of rain in just 24 hours.

So far government has advised the general public to relocate to higher grounds as disaster officials warned that more heavy rain was expected over the weekend.

“The Government is urging people living in flood prone areas to urgently relocate to upland areas to avoid losing more lives because what the country has witnessed is only the beginning of the onset of rains” warned Principal Secretary for Malawi’s Disaster Management affairs, Paul Chiunguzeni.

According to officials at the Department of Meteorological services, the central and northern part of Malawi should prepare for more heavy rains this coming week.

Earlier this week, the government declared half of the country to be a disaster zone and appealed for help.