Food security is a major concern for our rapidly growing planet. As resources dwindle and the population rises, smart solutions for better agriculture and safer food storage are essential.

No other single country – certainly not one as young and as tiny as Israel – has contributed more breakthroughs in this area than Israel.

Since the 1950s, Israelis have not only been finding miraculous ways to green their own desert but have shared their discoveries far and wide through channels including MASHAV, Israel’s Agency for International Development Cooperation at the Ministry of Foreign Affairs.

Probably no other advancement has been quite as significant. While the concept of drip irrigation existed well before Israeli statehood, it was revolutionized by Israeli water engineer Simcha Blass, who serendipitously discovered that a slow and balanced drip led to remarkable growth. He created tubing that slowly released water where it was most effective, and in 1965 Kibbutz Hatzerim built a whole new industry, Netafim, based on his invention.

Just one recent example of how this method has impacted food supply in foreign countries is Tipa, literally “Drop,” an Israeli-developed kit that has allowed 700 farming families in Senegal to reap crops three times a year instead of just once, even on infertile land.

Tipa is “a simple drip irrigation system that uses gravity when there is no water supply or water pressure coming to rural areas,” MASHAV’s Ilan Fluss told ISRAEL21c. The organization has similar activities in Kenya, South Africa, Benin and Niger.

Senegalese farmers learning how to install the Tipa irrigation kit.

Israeli-designed GrainPro Cocoons provide a surprisingly simple and cheap way for African and Asian farmers to keep their grain market-fresh.

The huge bags, invented by international food technology consultant Prof. Shlomo Navarro, keep both water and air out. They’re used all over the developed world, including Africa and the Far East, and even in countries that have no diplomatic ties to Israel, such as Pakistan.

As much as 50 percent of every grain harvest and 100% of every pulse harvest is lost to pests and mold, Navarro told ISRAEL21c. Subsistence farmers in developing countries tend to store their crops in primitive baskets or bags, which are not effective in keeping hungry bugs and micro-contaminants out. The Cocoon solves that problem, even in extreme heat and humidity.

“Sixty percent of California strawberries since 1990 are treated with this predatory mite from the Holy Land,” he reported. In Israel, Bio-Bee products have enabled sweet-pepper farmers to reduce the use of chemical pesticides by 75 percent.

SAE Afikim is one of 10 Israeli companies involved in a five-year project in Vietnam to implement every aspect of a vast $500 million dairy farm project. It’s the largest project of its kind in the world.

The operation will encompass 30,000 cows at 12 state-of-the-art mega-dairies and a milk processing plant supplying 300 million liters per year. By the end of 2012, 500,000 liters are expected to be produced daily.

In the meantime, China is sending groups of dairy farm manager trainees to Israel to learn how to boost milk production there as well.

The Chinese are using Israeli systems to set up their dairy industry.

CEO Ron Shani told ISRAEL21c that AKOL applications advise farmers on when to plant, irrigate and harvest; how to cope with drought; how to choose the crops best for their area; how to implement ideal storage and temperature control procedures based on climate; and how to track the growth of chickens, livestock and fruit, among other ideas for running a modern, professional farm.

It took nearly 30 years of research, but Hebrew University’s Prof. David Levy developed strains of potatoes that thrive in hot, dry climates, and can be irrigated by saltwater.

Potatoes are one of the top sources of nutrition in the world, but they never before grew well in hot, desert regions like the Middle East. Now farmers in these regions can grow potatoes as a cash crop.

Levy told ISRAEL21c that he also intended his research to enhance understanding between Israel and its neighbors, as scientists and officials from Jordan, Egypt, Lebanon and Morocco meet with Israeli scientists to share knowledge and build bridges of information and technology.

7. Squeezing Every Drop Of Water From The Air

Tal-Ya Water Technologies developed reusable plastic trays to collect dew from the air, reducing the water needed by crops or trees by up to 50 percent.

The square serrated trays, made from non-PET recycled and recyclable plastic with UV filters and a limestone additive, surround each plant or tree. With overnight temperature change, dew forms on both surfaces of the Tal-Ya tray, which funnels the dew and condensation straight to the roots. If it rains, the trays heighten the effect of each millimeter of water 27 times over.

Inventor and CEO Avraham Tamir told ISRAEL21c that the trays also block the sun so weeds can’t take root, and protect the plants from extreme temperature shifts. “Farmers need to use much less water, and in turn much less fertilizer on the crop,” which translates to less groundwater contamination. 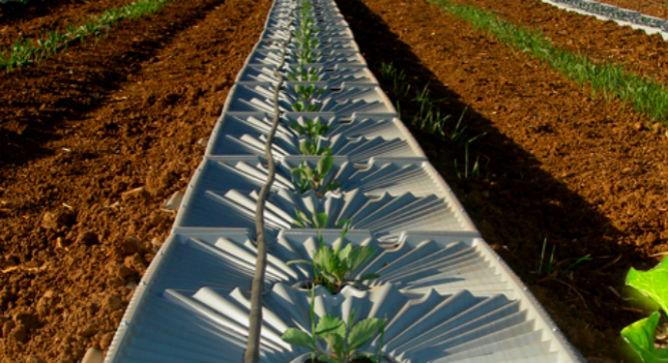 The total worldwide herbicide market is valued at more than $15 billion, of which approximately a quarter is dedicated to soil-applied herbicides and other pesticides. The Israeli approach incorporates herbicides into micelles or vesicles, which are absorbed onto negatively charged clay minerals to enable a slow and controlled release, reducing leaching to deeper soil layers. This enhances efficiency and reduces the required doses.

The novel insecticide kills caterpillars of night-flying moths – a common scourge for farmers worldwide – but unlike common commercial preparations, has minimal or no effect on any other creature. High levels of control can be achieved with much less product, greatly minimizing environmental impact.

9. Fishing In The Desert

Overfishing is a serious threat to the food supply, a grave situation since fish is the main source of protein for hundreds of millions of people. But what if fish could be raised virtually anywhere, even in the desert? That is just what the Israel’s GFA (Grow Fish Anywhere) Advanced Systems has made possible.

The Israeli “zero-discharge” system eliminates the environmental problems in conventional fish farming, and doesn’t depend on electricity or proximity to a body of water. Specially developed microbes purify fish waste byproducts right in the tank, with no need for spillage and refilling.

The largest facility using GFA technology, in New York, produced about 100 tons of sea bream, bass and tilapia in 2010.

Israel’s Seambiotic clean-tech company recently launched a commercial algae farm in China and does business in the United States and Italy as well.

Plus, the tiny plants, which thrive on carbon dioxide and sunlight, produce a valuable nutraceutical food additive that is especially popular in the Far East.

Half a century ago, Lake Victoria carp was a significant part of the diet of the nearby Ugandan villagers. But when Nile perch was introduced to the lake, it decimated most of the smaller fish including the carp. Villagers had neither the equipment nor the expertise necessary to start fishing the huge perch, and symptoms of protein deficiency started becoming apparent in their children.

Prof. Berta Sivan of Hebrew University came to the rescue with a multiyear project near to help these African families. Her team was able to apply techniques developed over many years for Israeli fish farmers.

The Israeli project not only successfully spawned carp on Ugandan fish farms, but also provided training on how to dig and fill ponds and raise the small fish. Now local children have an abundant supply of protein to eat with their fruit and vegetables.

Hebrew University agricultural scientists Ilan Sela and Haim D. Rabinowitch developed TraitUP, a trademarked technology that enables the introduction of genetic materials into seeds without modifying their DNA. This method immediately and efficiently improves plants before they’re even sowed.

The university’s Yissum Research Development technology transfer company licensed the seed treatment technology to Morflora Israel for curing fruit-tree diseases in orchards and groves, and for seedling treatment in the nursery.

“The new ability to deliver traits within days instead of years, and to offer a treatment with results similar to breeding to all current species, answers a long and unmet need that will revolutionize modern agriculture and significantly impact the vegetable and commodity crop markets,” said Dotan Peleg, CEO of Morflora.